Official list of screenings for Going Cardboard: A Board Game Documentary.

July, 2012
Aukland, New Zealand
Board Games by the Bay Con 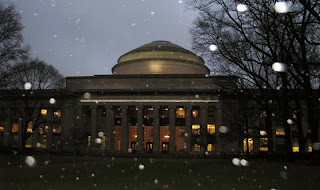 This past Thursday night was a huge milestone for the film - my first screening in front of a live audience of people I didn't know personally. The film had screened earlier this month in Berlin, Germany (also awesome given it's ties to German board gaming), but this was the first showing in the US, and also the first one I would be at, and it included a Q&A session afterward. Nervous does not begin to describe. The film is basically done at this point, but a public screening like this gave me the chance to observe audience reaction, and another viewing to assess the need for any final edits or tweaks. 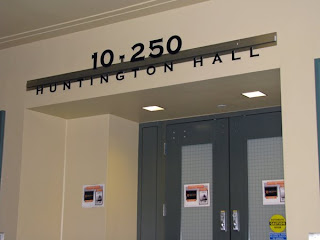 The screening took place as part of the GAMBIT film series, put on by the Singapore-MIT GAMBIT Game Lab. The theme was movies about gaming, and Jason Scott's Get Lamp was shown the following evening. The event was free to the public, and it took place in the swanky and iconic domed building at MIT. I got a little walking tour of the campus before-hand, which included a peek into the room where the screening was to be held. 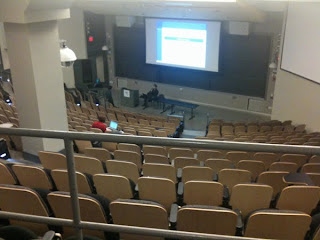 Around 6:45 we started setting things up, and people were already filtering in at that point. A number of good friends I hadn't seen in ages came, and it was very comforting to know I had allies in the room. My editor, Jason Scott, was in attendance, as was Greg Lam, an indie designer who runs Pair-of-Dice Games and is featured in the film.

The audience starts to form

Before I knew it I was welcoming the audience and giving a totally noob intro, and then the lights went down and the movie started. I scuttled off to the back of the room to try and watch both the crowd and the film at the same time. I think there were 40 - 50 people in total, which felt like quite a lot. Finally, about 10 minutes into the showing, the constant stress and tension I'd been feeling for the prior two days melted away. People were enjoying it. They were paying attention, laughing at the right moments, and by the end of the screening, nobody had walked out.

The lights came up to a round of applause that I will totally never get used to but is an amazing feeling, and we dove right into the Q&A. The questions were good, there were plenty of them, and I think my answers were more or less on target. The Q&A lasted about half an hour I think, and then I got to chat with people for another half hour or so, and then a bunch of us went to Legal Seafoods to celebrate. It felt like such a perfect culmination of all the hard work over the past three years, and while that work isn't done quite yet (there's that small matter of a DVD to create, and a schedule of screenings to organize and publicize, marketing to be done, etc.) it was unbelievably gratifying and very much an "it all comes down to this and it was worth it!" night.

So the night before, I couldn't sleep due to nervousness. That night, I couldn't sleep due to cloud 9 syndrome. I woke up very tired but still thrilled around 5 AM the next day to get ready for work. One final surprise was waiting for me. A review was already up for the film! And it was a positive review! And it was thorough, and they'd clearly been paying attention and... oh what's this? This review was written by ANDREW PLOTKIN??? OMG! He's a major mind in the field of text adventures. I'd seen him at the screening and recognized him right away because he's in Get Lamp, and had gone over to say hi. It was already an honor just to have him there at the event, but then for the first-ever review of Going Cardboard to be written by someone like that? Too cool. Far, FAR too cool.

There is more work to do. There will be more screenings, and there will be more Q&A sessions, and doubtless more fun moments to come (and frustrations/haters/bad reviews/criticism too of course), but I could not have crafted a better premiere. The MIT Game Lab has my undying gratitude for making it all possible.
Posted by Unknown at 5:44 AM 2 comments:

So, I wanted to bring your attention to a particular Kickstarter by one Bryan Johnson, for a game called Island Fortress.

Here's the project on Kickstarter. It's got 11 days to go, and it's going well, but you ought to get in on it if you can. Why? Because Bryan plays a big part in my film, and after watching it, you will probably want to have seen his Kickstarter succeed. :)

And when will you be watching it? Soon, my friend. SOON.
Posted by Unknown at 1:13 PM No comments: