The lack of posts here is a strong indicator that I've been spending every spare minute working on the documentary, for both August and September. So far this month, I've logged about 25 hours of editing, and have also recently filmed two big interviews. Let me tell you about those.

I drove up to Myriad Games in Manchester, NH, shortly after GenCon to interview the store owner, Dan Yarrington. This is the second games store that Dan has opened in the area (the first located in Salem, NH), so he's doing something right. Dan's wife, Sara, is an educator, one that uses board games in the classroom. I got to interview both of them in Myriad's spacious Game Parlour. 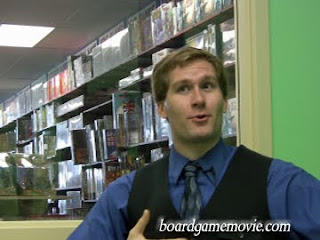 Dan's a big believer in professionalism and providing a service by helping guide customers to the right game for them. If you're in the southern New Hampshire area, I highly suggest you check out his store. It is beautiful and inviting, the staff are friendly, and the game room is really nice.

Eariler this week, I also drove up to Concord, NH to interview Eric Martin, editor of boardgamenews.com. Eric is largely responsible for my having discovered this hobby in the first place; it was his game group that my husband first attended. Eric's also been interviewed for Kevin Tostado's Monopoly documentary, "Under the Boardwalk," So he's gaining a reputation as quite the board gaming authority these days. :) 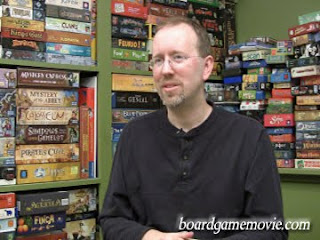 One of the topics of our conversation that really struck me was when Eric spoke about games as an art form. Just as movies, music, and books are not always written with the goal of pure entertainment, sometimes games are about something more than just "fun."

Today I had the afternoon off, so I did a bit of editing work, but then got side-tracked capturing portraits of all my existing interview subjects. This task had to be done, anyway. Here are some samples: 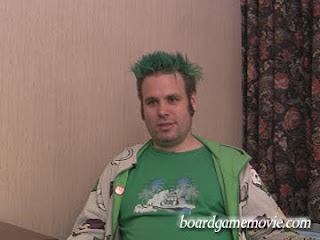 Friedemann Friese, the designer of Power Grid. He's awesome, and yes, he kinda looks like Dexter Morgan with green hair. 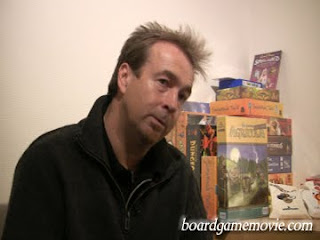 Nick Kellet, designer of GiftTRAP and also awesome. Those games in the background are phat loot obtained from Essen earlier that day. 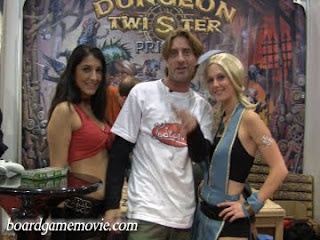 And just what is Dungeon Twister designer Christophe Boelinger saying in this shot? You'll just have to wait for the documentary to find out!

What's next? More editing (tomorrow, to infinity, and beyond). And once the full narrative is in place, have someone else edit it, smooth out the rough spots, color-correct, audio-correct, all that good stuff. Lots of work yet to do, but 95% of the filming is done, friends!
Posted by Unknown at 3:29 PM No comments:

Just a quick update for those interested. After a 3-day "vacation" doing editing, and then the infamous all-nighter, I started working on the movie almost every night, for an hour or two each session. Word of advice: slow and steady wins the race! It's better, at least for me, to do a little bit more frequently than marathon sessions. I'm happy I did both though, for sure.

All told, I logged at least 35 hours of editing work during August. I have a rough cut of the first 10 minutes of the film. And probably another 10-15 shaping up nicely right after that part. Large segments are coming together, and a coherent progression of discussion is emerging. That's exciting.

But August is gone, now. Oh, hai September! Let's get to work. Now I'm thinking about what I can do for something trailery or promotional in October (Essen season) since it's unlikely I'll be ready to release by then.
Posted by Unknown at 3:26 PM No comments: