Hour 1, going through the Mark Kaufmann (Days of Wonder) interview.

Proper execution of an all-nighter

I'm thinking about doing something I've never done before.

Friday night, the kids are going to be with the grandparents. I'm in the mood to edit, but I can't take any more time off work just now.

I'm thinking of doing an all-night editing session. Yes, true believers; an all-nighter. And I want it to be a flawlessly executed all-nighter in the classic style. I somehow got through college without ever learning this art. The closest I have been to it was a Sunken Temple raiding session in WoW that went till 2 AM. /shudder

So what do I need to do here? How late is Starbucks open, I wonder? Is it dangerous to mix cappuccino with Amp? Should snacks be involved, or no?

The planning has begun!

Just enough time to shut down now. I planned on doing so an hour ago, but anything but a full court press just seemed like the wrong way to end a 3-day editing extravaganza...mission...quest...thing.

The latest runtime for the film (and this is a meaningless number of course) is I think 2 hours and 45 minutes or so, not counting bonus features.

Tons and tons more to do, but from here on out, I will be grabbing every spare hour of time I can wherever and whenever I can, to do it. I've been doing so, to a point, up till now, but let's just say... @#$%& just got real! 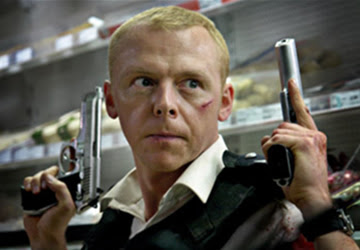 Posted by Unknown at 1:49 PM No comments:

One of the things that struck me while wandering the halls at Essen was that I was hungry. Borderline starving. I'd been full-tilt filming so intensely, running from one interview to the next, eating was pretty far down on the priority list. When I finally did force myself to address this bare necessity, though, Essen was there for me.

First, there were the bulk candy bins. This is another indicator about how kid-friendly the event is, Haribo has at least two massive tables filled with bulk candy. It's like a scene out of Willy Wonka (the original). 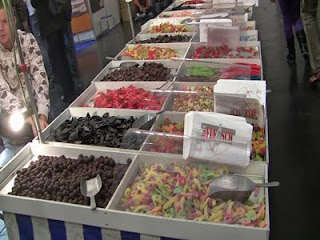 I passed that up, though, for the Snack Point, a stand about the size of a Starbucks in a mall or airport, alive with sizzling sausages and all manner of good food. I got a curry bratwurst there, and it was anything but bland. They probably thought I was an idiot, there with my camera filming the sausages, but my job as an indie servant is to bring you the sights and sounds of the moment (even if I have to look like a fool to do it). 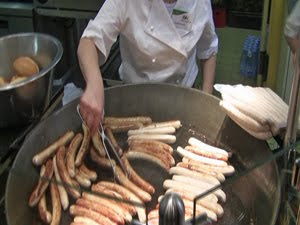 On one of the following days, I found mushroom goulash at another stand, and it was truly the best mushroom stew type thing I've ever had. I would be hard-pressed to make something as good at home. It was only made better by the combination of being ravenous and expecting far lesser fare at a game convention. Oh, and I do believe the goulash stand also had beer. Not something you'd see at an American convention, especially one that welcomes children, right? If there was one in the US that was this kid-friendly, of course... 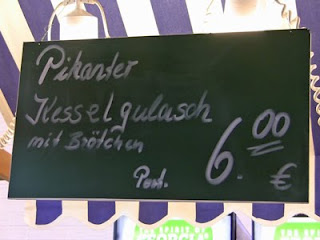 I forgot to get a good shot of the crepe stand, which was a silver volkswagen-style van serving crepes out the side. I didn't get to try one, but just, Hello!?! A crepe stand at a game con! FTW! 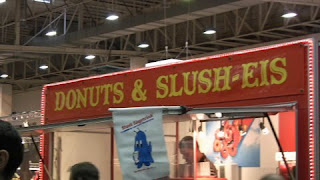 Day 2 is drawing to a close, and I'm feeling it. After a poor night's sleep (humidity makes me a sad bunny), I didn't really dive into it until 10 AM. A wasted HOUR, shame on me. Time is precious.

Here's what I got through today:

Feeling pretty tired right now, I think pretty close to the way I was feeling around Essen day 2, when I filmed a Blair Witch parody about being lost. I *may* let that footage see the light of day sometime.

Tomorrow, I still need to shuffle the segments, and bring in the Matt Leacock (Pandemic) and Nick Kellet (GiftTrap) interviews. Oh, and the Klaus and Guido Teuber interviews, because now I have a spot in mind for where to put those. :)
Posted by Unknown at 1:58 PM No comments:

All you lucky Gen Con 2010 attendees, make sure to swing by the GameSalute.com booth there! It's booth 929, and in addition to all the other board gaming news and interviews you'll find out about there, you may just catch a glimpse of the Going Cardboard teaser trailer. On the show floor. At Gen Con. /squeeeee! :D

Big thanks to the great folks at Myriad Games in Salem and Manchester, NH for making this possible. You'll be seeing them in the film!
Posted by Unknown at 7:15 AM 1 comment: 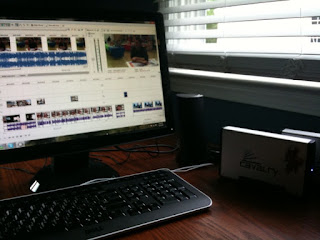 I think I got a lot done. I went through the full interviews I did with Corey Konieczka of Fantasy Flight Games, and Nick Medinger of Funagain.com. An awful lot of both these interviews is great material, but for the first pass, I'm just throwing in the segments that are good in the sections they roughly belong in, and will edit that down later.

Here are some of the other things I hope to do in the next two days:

That's by no means everything that needs to be done, just some things that jump to mind. I ended the day by re-watching the closing and credits, which are among the closest to finished bits. The momentum by the end of the day seems good, and will hopefully grow tomorrow. 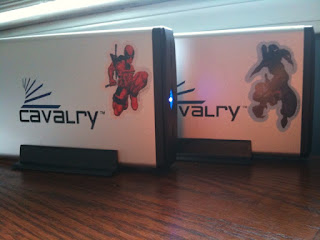 It's going to take a lot more than three days to finish this puppy. Things I still need to film but will have to wait for another time (in the near future) include:

There are some additional segments I'd do if I had more time and funds, but I've hit the point where I have to realize that I have "enough" and that I could go on filming indefinitely if I let myself. And besides, what would that leave as far as material for Going Cardboard: The Revenge?
Posted by Unknown at 4:09 PM 1 comment:

Several improvements over what was shown at Origins. Read more here.

So. Last Monday, I requested 3 days off from work next week to edit the film. The following chain of events then took place:


Luckily, all my footage is on external hard drives, as is the Vegas Movie project file. Those were fine, though they are also backed up. At the stroke of 10 AM, I hustled the kids into the car, and peeled out of the driveway for the local Best Buy. By 3:30 PM Saturday, I was setting up a new computer, a PC this time, that had so much going on compared to my old laptop, it literally had special system memory allocated JUST to laugh heartily at its own power. Like Captain Hammer. For about half the price.

By 9 PM Saturday night, I was emailing my contact with a link to the finished teaser video. I'll talk about that later if all goes well; I'm not superstitious, but I never go into detail about something this good until it actually happens. Don't want to jinx it.

Sunday dawned bright and beautiful! I cracked into the Indie Film Bootcamp seminar, which had arrived in the mail on Friday, and started getting super-inspired. Look out film, you are about to be edited with a vengeance!

Especially since I have ideas for three more documentaries after this... but one thing at a time. I believe it was Porkins who put it best when he said, "Stay on target. Stay on target."

PS - I am going to try to get the laptop fixed, but this new PC can render footage about 6 times faster than the laptop. It was something I needed anyway, but was trying to gimp along without. How silly of me.
Posted by Unknown at 6:13 AM No comments: