Nerd News posted an interview today with Ticket to Ride designer Alan Moon. It's a good interview, including some insights on how important the major industry awards like the Spiel des Jahres are to board game designers: 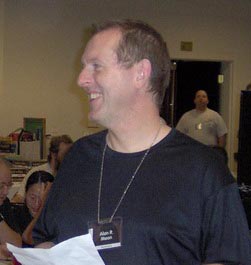 I like to say that winning the SdJ for ELFENLAND got me back to zero. Winning the SdJ for TICKET TO RIDE made me successful. ELFENLAND enhanced my reputation to the point where it made it easier for me to be a game designer and sell future prototypes. TICKET TO RIDE has become a staple and its sales are allowing me to enjoy other things in life. Before ELFENLAND, there was definitely pressure to design a game that would sell a lot of copies. Now there is no pressure, just the continuing desire to design another big hit.

Many of the industry people I've spoken to point to the existence of the Spiel award as a big part of why board gaming is a bigger deal in Germany than it has been in the States. For one thing, it incents designers to produce both innovation and quality. For another, it has given the mainstream media there a reason to cover the genre to a much greater degree than we've seen here in the past. That part, at least, seems to be changing, though the primary angle seems to be that "board games are great in recessions because they're cheap." This clearly does not refer to designer board games, which are NOT cheap.

Thanks to Boardgamenews.com for the heads-up.
Posted by Unknown at 3:39 PM No comments: